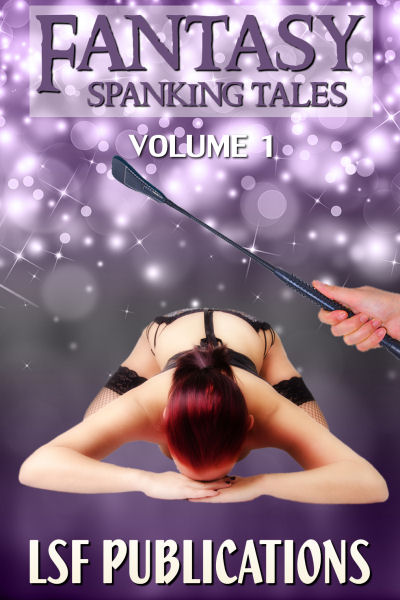 LSF have included one of my early stories, “The Guardian,” in the first volume of the new anthology Fantasy Spanking Tales. I am positively giddy at being selected, and more so at seeing one of my little tales along side some of my favourite authors.

This volume of Fantasy Spanking Tales contains seven spanking stories that feature a fantasy or supernatural based theme:

Possessed by Sam Stewart: After Jill is tragically killed in a car accident, her ghostly presence watches over her twin sister Sue, and her husband John. Seeing that John is becoming dissatisfied with his wife’s sexual shyness, Jill is able to influence her actions so that Sue gets a spanking from her husband, which leads to a much improved situation in the bedroom!

The Guardian by Kia Cera: A troubled couple gets help from an unexpected source when Bree goes exploring and, seeking to get out of the rain, stumbles into a chamber. The Guardian of the space is not cruel, but he does know just what she needs and apparently, so does she.

Brat Tamer by John Benson: The Queen’s daughter is quite the brat and earns both herself and her friend a week being ‘short skirted’. This permits men to spank and use them at any time but the Queen has two specific men in mind: Sir Charles, and Lord Boris, the tamer of brats. Both girls get their first caning from the invited male guests, but the results are somewhat surprising.

The Magic Carpet by Lucy Appleby: After breaking up with her boyfriend, Jeannie returns home to visit her Mum, who tells her an old story about a magic carpet and the handsome man who rescues a headstrong, beautiful slave. He spanks her for the danger she has put herself in yet their relationship is not meant to be. Jeannie realizes her own destiny is connected to this story and goes to meet the magical stranger she has been waiting for her entire life.

The Lady of Hillcrest Manor by Leland Mays: Patricia is known for being an austere type of person, with no warmth to her character but when she moves into Hillcrest Manor this starts to change. Several times she finds herself being spanked by an unseen hand. Over time she changes and meets Richard who is only too happy to take over the role of disciplinarian.

The Taming of Tanith by Geraldine Hillis: Craig and Tanith are deeply in love, but once a month she becomes very aggressive, unnaturally strong and wanders off into the night. His attempts to spank her into compliance have no effect and eventually all he can do is chain her in the cellar. However, an antique shop may just have a solution…

The Girl Who Cheated Death by Fiona Blue: When Lydia wrecks her car in a crash, her life is saved by a passerby named Paul. Some time later when she is fully recovered they meet, she falls for him and he absolves her of her guilt by giving her a spanking. But there’s something strange about Paul, something mysterious…

3 thoughts on “I’ve been Published!”

Spanking and all content of this blog is intened for adults only. Many pictures on this site are not my own and are borrowed from other sites exploring similar subjects. Every effort has been made to credit the owner and/or site on which I first encountered the picture. Citations may be corrected or pictures removed by request of the owner. Contact Kia

Meet me at CLASS Ireland