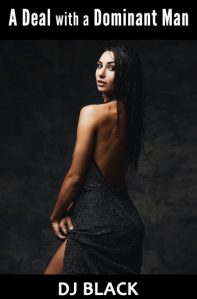 LSF Publications have released an ebook of one of DJ Black’s final (or, I hope, most recent) serials from his A Voice in the Corner blog.   A Deal with a Dominant Man is a lovely blend of workplace and domestic discipline, in which Carolynn receives a loving if not-so-gentle into the world of corporal punishment.   Her changing relationship with her boss is fascinating on its own, but the exploration of how this new dynamic impacts Carolynn’s relationship with her sisters adds another layer of complexity to the story.

Thirty-year-old Carolynn Blake is an attractive, high-flying businesswoman, but she pays a price for being over confident when the stock markets crash, leaving her in financial trouble. She turns to her friend and mentor, John Dacia, for advice. Older than she, the wealthy property developer listens to Carolynn’s surprise proposal. With his financial backing, Carolynn convinces him she will make him even richer … and part of the deal is that he gets to mix business with pleasure by spanking her hard and sending her to the corner like a naughty girl.

But Caroline has never been spanked before, and has no idea what to expect. She soon learns! Her changing relationship with John – a lifestyle dominant – takes her way out of her comfort zone. Previously independent, she now has to do as she’s told and is punished for any infractions – with hand, hairbrush and cane. Sometimes she is disciplined in his office. Carolynn is not an easy woman to tame, but John is the man to do it; he can be strict and is very much in control of himself … and her. As time passes, Carolynn gradually learns to accept his dominance over her, and her desire for him grows.

This is the story of their developing relationship, and the way control, authority and discipline shape Carolynn’s character to the extent that she falls in love for the first time…

Spanking and all content of this blog is intened for adults only. Many pictures on this site are not my own and are borrowed from other sites exploring similar subjects. Every effort has been made to credit the owner and/or site on which I first encountered the picture. Citations may be corrected or pictures removed by request of the owner. Contact Kia

Meet me at CLASS Ireland